Pickleball is a racket/paddle sport that was created by combining elements of several other racket sports. Two or four players use solid paddles to hit a perforated polymer ball over a net. The ball is much like a wiffle ball, with 26–40 round holes. A pickleball court is similar to badminton, with a net similar to tennis, and the paddles are similar to those in table tennis.

Pickleball was invented in 1965 on Bainbridge Island, a short ferry ride from Seattle, Washington. Three dads – Joel Pritchard, Bill Bell, and Barney McCallum — whose kids were bored with their usual summertime activities — are credited for creating game. Pickleball has evolved from original handmade equipment and simple rules into a popular sport throughout the US and Canada. The game is growing internationally as well, with many European and Asian countries adding courts.

PlayPoint is offering the Taraflex Olympic quality courts from Gerflor, the worldwide leading brand of indoor sport floors, as the playing surface for Pickleball. These courts offer world class playing experience with optimal performance and safety for the players. 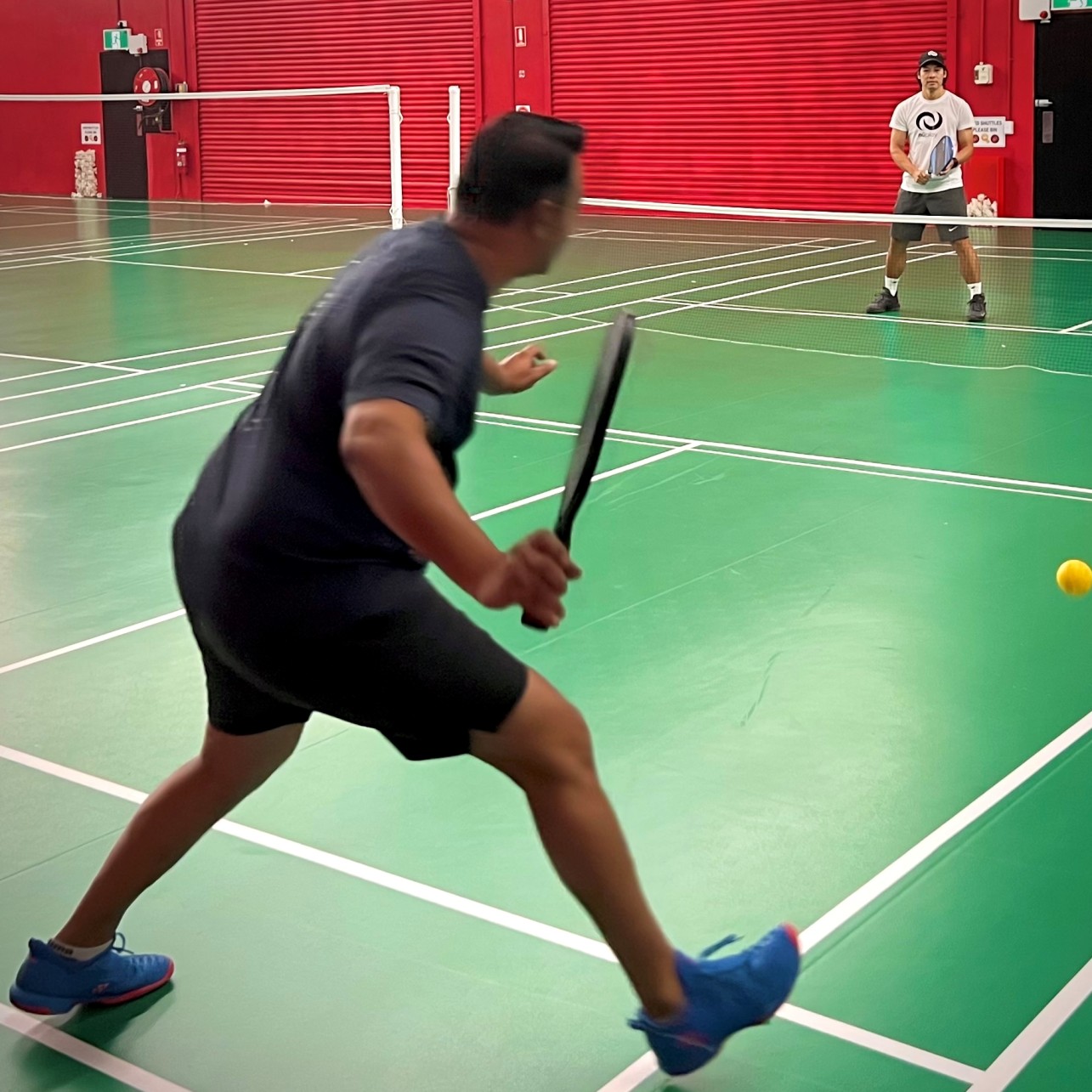 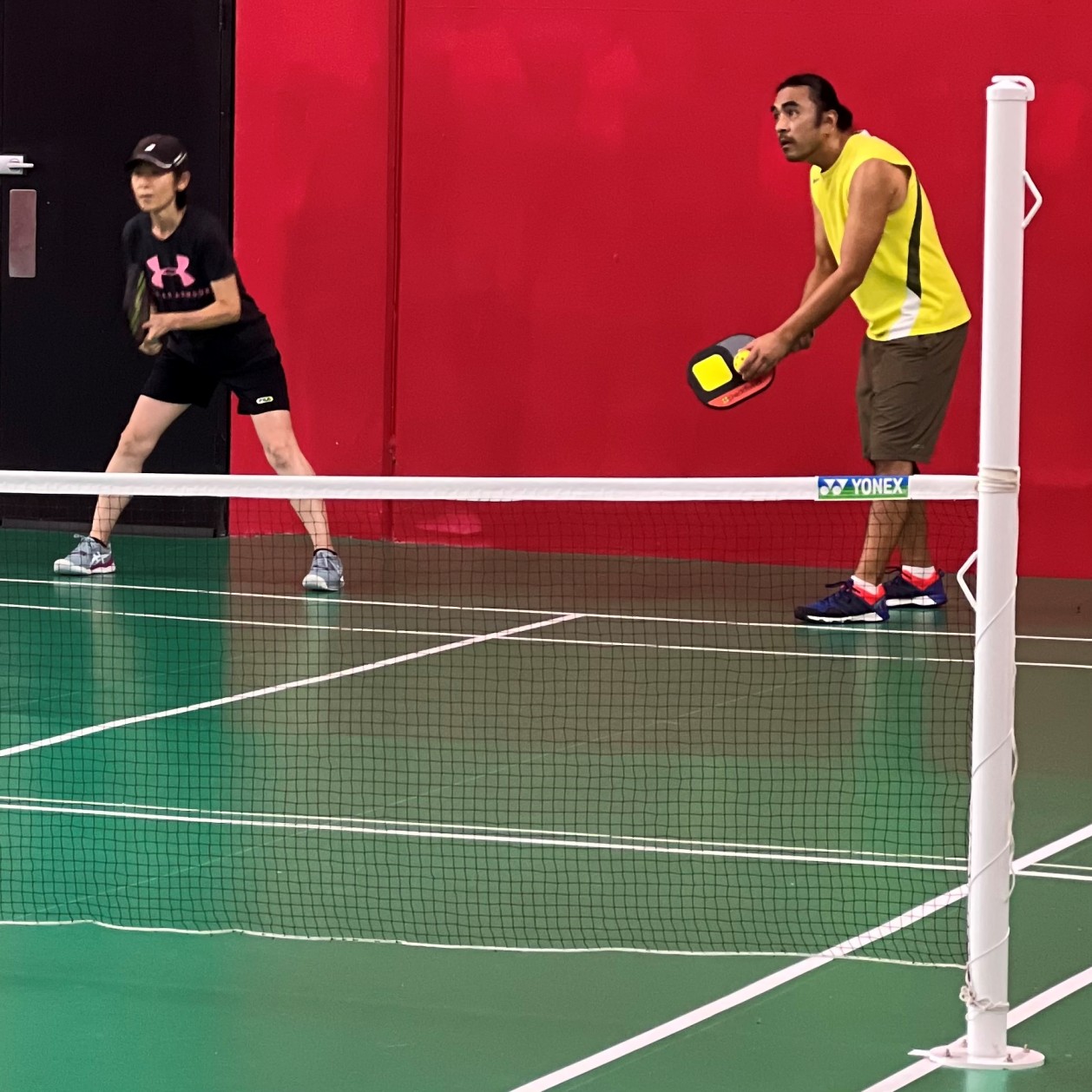 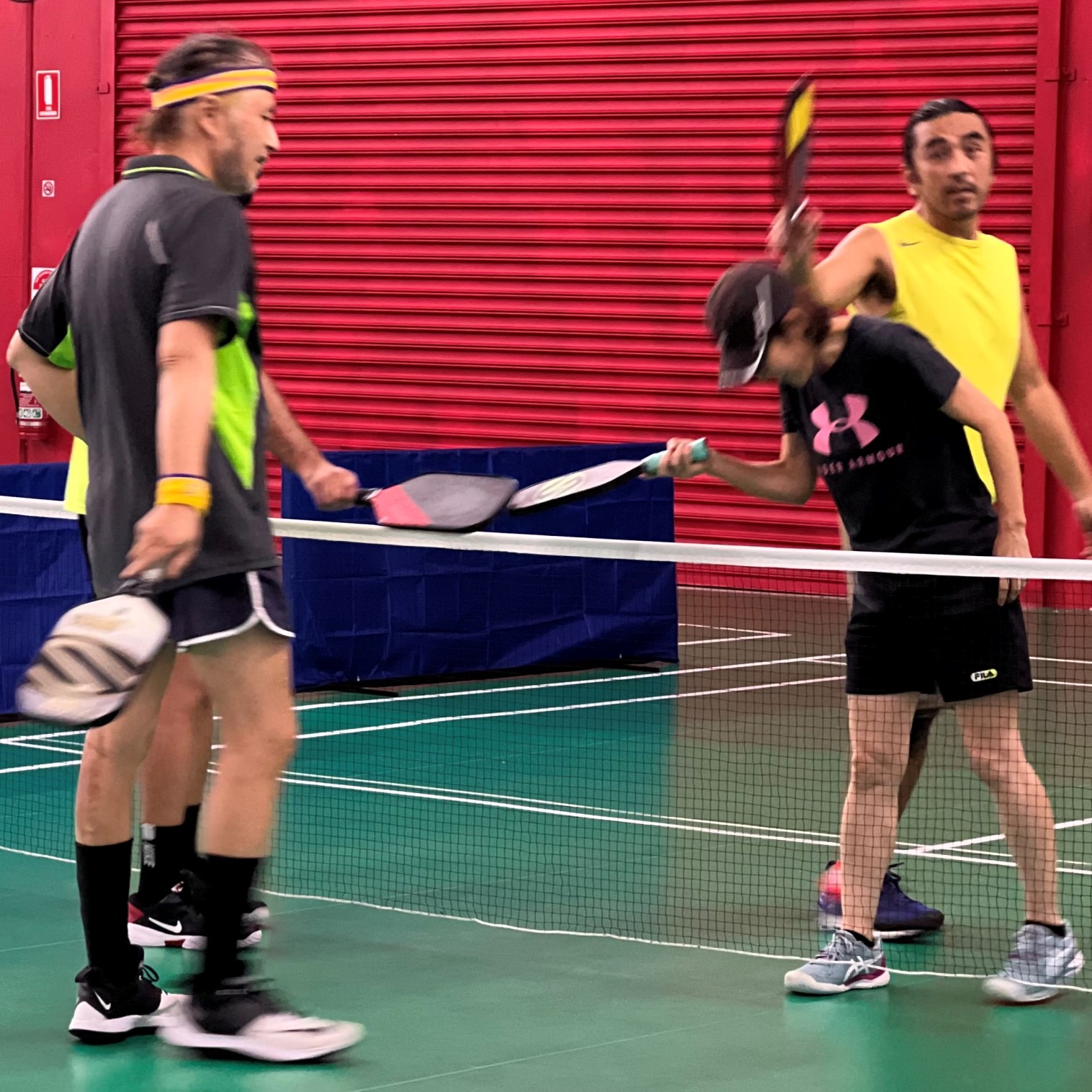 To begin the game, the ball is served diagonally over the net. The server will stand behind the service line of the right-hand service square and hit the ball underhand and below the waist. Furthermore, the server cannot bounce the ball off the ground before hitting it. In order for the service to be considered in play, it must clear the seven-foot no volley area and land in the service court left of where the server is standing. The server will alternate from right to left service areas after each service point, but unlike tennis where the server gets two attempts, only one serve is allowed in pickleball. However, if the ball hits the net and lands in play, the server gets another attempt.

A player or team can only score a point when they’re serving. The player or team continues serving until they make a fault, at which point the other team will take over the service. A team can score a point on a serve when the ball lands in the service area and the opposing team is either unable to make contact with the ball or hits it out of bounds or into the net. If the ball is successfully returned and a volley ensues, only the service team gains a point when the opposing team hits the ball out of bounds or is unable to make a return volley on a ball that drops in fair play. Each fault is worth one point to the serving team.

Your success at pickleball depends largely on your ability to hit the ball within the lines on the court. A line call is simply a verbal indication of whether the ball hit within the line or outside of it. For example, if a player shouts “out,” that means the ball has traveled beyond the line and out of fair play. In most situations, the players are responsible for making objective judgments on line calls, each making the call on their respective sides. The code of ethics established by the USAPA says that if a call is in question, it should be “resolved in favor of the opponent.”

A fault ceases all play, because a rule has been violated. This can range from hitting the ball into the net during a serve or a return; failure to hit the ball before it bounces twice on a player’s court; hitting the ball out of bounds; or if a player touches the net, either with their paddle, clothes or any part of the body, that’s considered a fault. It’s also a fault if the ball strikes a player. However, if the ball hits a player’s paddle hand below the wrist, the ball is considered to be in play. Finally, hitting a player who is out of bounds is also considered a fault.

When a fault has occurred, the ball is deemed “dead.” Basically, any action that stops play will require declaring the ball dead. The ball will not be considered dead while it is in play until the moment it bounces twice. Players might also call a ball dead when anything hinders play, such as a stray ball that comes onto the playing surface or a person who disrupts play by walking onto the court.

The non-volley zone is kind of like a “no man’s land.” The zone extends seven feet from the net on either side of it, and goes out to the sidelines. Players can’t volley a ball while standing in this zone. Doing so will be considered a fault. Players will often try a drop shot volley, which is a shot that lands as close as possible to the net, preventing the opposing team from making a volley attempt. A successful serve is one that clears the net but also clears the non-volley zone line.

Whether you’re playing singles or doubles, only two time-outs are allowed per game for side (team). Time outs are limited to 60 seconds in length. If a server has started the serving motion, you can’t call a time-out; you can only call a time-out when the ball is not in play. Should the game rules be augmented so the winner is trying to reach 21 points, each side is allowed three total time outs. Another exception is for injury time out; however, it must be agreed either with the referee or opposing team that an injury has taken place. Injury time outs are limited to 15 minutes. If the injured person cannot resume play, the match goes to the opponent. There are also equipment time outs. While players are expected to maintain their clothing and equipment during regular time outs and during the brief periods between games (not to exceed two minutes), fair and safe continuation of the match is also the priority. Should something occur during regular play that compromises clothing or equipment, a two-minute equipment time out can be called.