How to play Table Tennis

Table Tennis is one of the most exciting sport to watch as it involves intense speed and jaw-dropping
precision. It is highly popular among all age groups as you’ll find kids, youngsters and adults
indulging in this activity with utmost excitement and fervour. 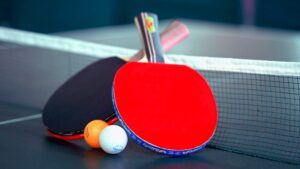 Let’s look the key points as how to play Table Tennis:

A table tennis match begins with the umpire conducting a
coin-toss. The winner has the options to serve the ball first, receive it, or choose the side of the table
they’d like to play from.The server has to hold the ball with an open palm, toss it up and strike it in a manner that the ball
bounces first on the server’s side of the table before bouncing over the net to the other side.
The receiver, however, can return it by hitting it over the net and into the opponent’s half of the
table. If the player attempts to return the ball before it bounces, a foul is called.
In singles competition, while the service rule allows the server to serve to any part of the table on
the opposite end, in doubles, the service has to travel diagonally across the table. Here, the serving
player plays from the right side of the table.

How to score points in Table Tennis –

The aim in table tennis is to strike the ball in a manner that the
opponent fails to make contact withthe ball, which earns the player a point. This can either be by sheer
power, spin or other deceptive means.
However, if the ball hits the net and it fails to bounce over into the opponent’s half, or hits it over
the net and out of bounds without coming into contact with the table, the opponent gets a point.
In doubles, the rule gets a bit more tricky. Here, the server and the partner have to alternate while
attempting to push the ball on to the opponent’s side of the table. Here the service alternates as
well.
The opponent can also be awarded a point if you hit the ball outside the playing surface or if the ball
comes in contact with any part of your body while attempting a shot.

How to win in Table Tennis-

According to the laws of table tennis, a player can win a game of table tennis by scoring 11 points –
with one point awarded for every infringement. Every player gets to serve twice in a row. The first
player to 11 points is declared the winner.
If the points are tied at 10-10, a player then has to strive for a two-point lead to win the game.
A match is won by winning games. The number of games per match varies across competitions and
categories. While singles matches are usually a best-of-seven event, doubles are a best-of-five affair.

Table Tennis is one of the most popular indoor sports around the world. If you are interested in the
sport, then do check out the facilities at PlayPoint Indoor Sports Centre.

No comments to show.